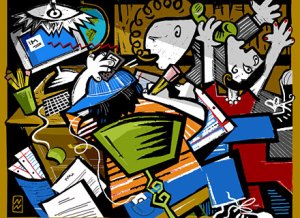 Death of the Mono-Media Environment?

A new study from Boston College’s Carroll School of Management on the impact of multi-media multitasking has some significant implications for marketers using TV or online channels.

In a forthcoming edition of the journal Cyberpsychology, Behavior, and Social Networking, Professors S. Adam Brasel and James Gips demonstrate that, in a side-by-side challenge for multitasker attention, the computer dominates TV, but neither device holds attention for long periods.

Prior surveys have shown that 59% of Americans use their computer and television at the same time, and for those who do:

For companies that rely on TV or the Internet to communicate with consumers, these findings regarding the physical behavior of multi-media multitaskers raise questions about the effectiveness of both channels as a means to garner the attention of potential customers.

The researchers noted that the study did not take into account the impact of a multi-media distraction that may eventually push both TV and computers to the side, in terms of multitasker dominance: the mobile phone. According to Professor Brasel, “Assumptions about how people are using media need to be updated. The era of the mono-media environment is over.”

Marshall McLuhan has been dead for 31 years, but I’m confident he would have had something clever to say about the death of the mono-media environment.