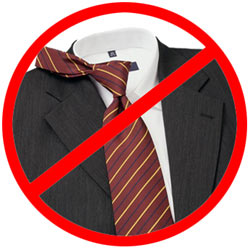 For Sir Richard Charles Nicholas Branson – the English business magnate known for his Virgin Group of more than 400 companies, his daredevil exploits, his humanitarian deeds, and his estimated net worth of $4.2 billion – nothing is more important than brand image.

Largely because Virgins are always in short supply, Branson serves as the personification of his brand, and works hard to nurture the image of a counter-culture, free-spirited, creative thinker who’s always ready with new solutions to old problems, eager to challenge the status quo. The public’s role is simply to accept the underlying notion that Branson’s companies all embody the same sort of energy and positive thinking that he exhibits, and to ignore the fact that several of his ventures have gone belly-up over the years.

So it’s no great surprise for Branson watchers to see him crank up his PR machine to attack formal business attire – specifically the suit & tie – as the greatest threat to capitalism since Joseph Stalin (who, ironically, was never photographed wearing a business suit.)

Evidence of Branson’s well-managed crusade to disparage the defenseless suit & tie can be seen everywhere. He’s in London snipping off $125 silk ties from people he meets. He’s in Entrepreneur Magazine extolling the virtues of the open collar workplace. He’s on CNN, with his toothy smile, explaining why it’s impossible to be creative while wearing a business suit. Here’s a sampling of the Branson propaganda:

“Suits and ties in an office are just another type of uniform, but in an arena where uniforms no longer serve any useful purpose. At one time they probably showed that the wearer was, at the very least, able to purchase and maintain a fairly expensive piece of fabric. Now, however, in an individualized, interconnected culture, your achievements speak for themselves. The suit and tie is an anachronism.”

If businessmen believed that not wearing a suit & tie would make them more creative, move them up the corporate ladder faster, or get them closer to earning their first billion dollars, they’d all be on the Branson bandwagon. If casual wear was the proven secret to success, they’d all wear pajama bottoms, tank tops and Crocs to work (which happens to be the official uniform of everyone who works from home.)

But suit & tie wearing business professionals all know two important things that Richard Branson is never likely to understand or to acknowledge: